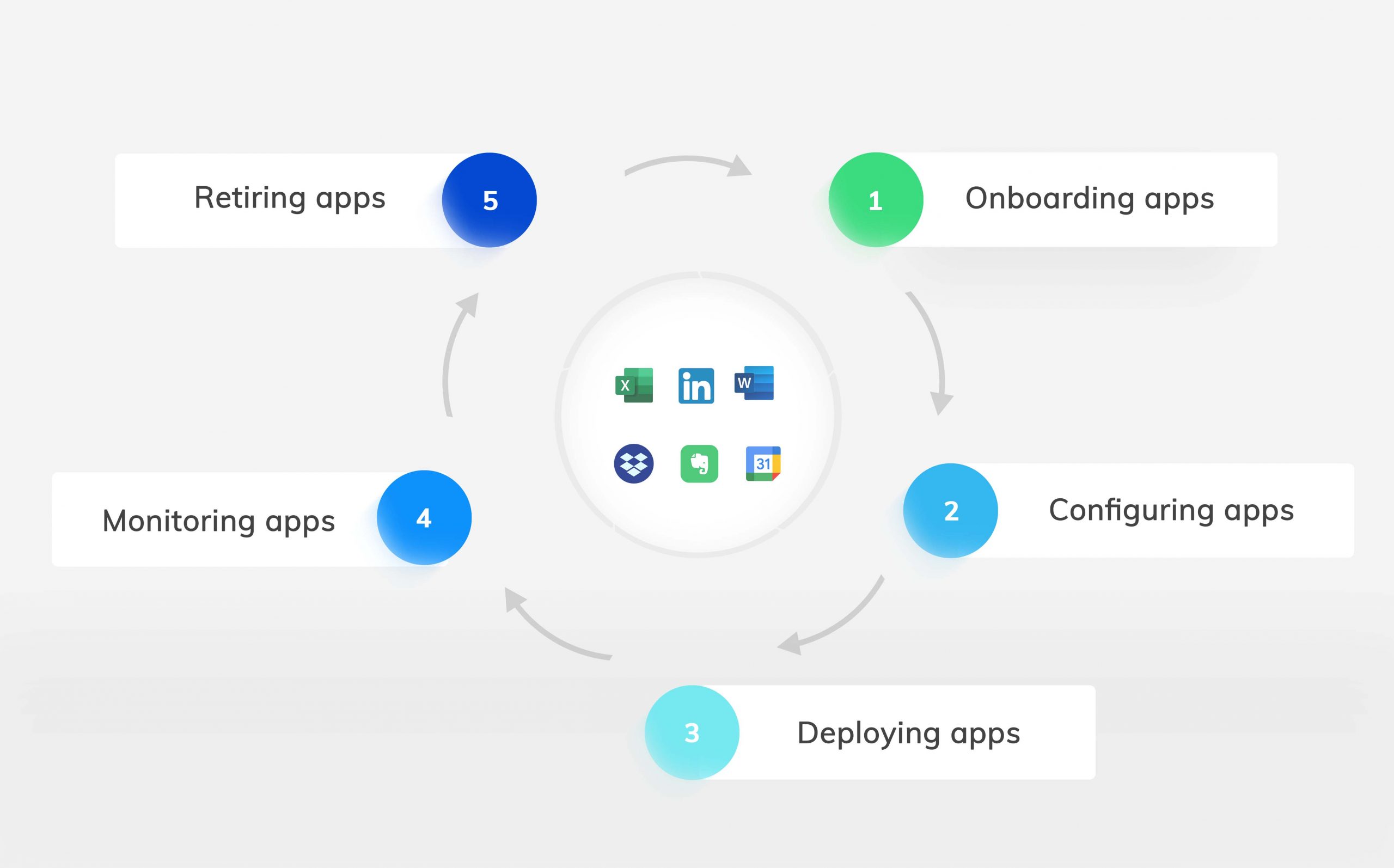 The first step in deploying apps to the devices is adding them to the App inventory of Hexnode. This is a one-time process. The added apps will be stored in the repository for future deployments. You can add store apps, custom enterprise apps, web apps and Managed Google apps. The admin can also add apps using their bundle ID.
Note that for Apple devices, VPP apps need not be explicitly added to the App inventory. Those apps will be automatically synced from the account when Apple Business Manager is integrated with Hexnode.

Apps might need to have user-specific configurations in them. For example, the admin can install the same mail app on all the devices. However, the email configuration in the app should be different for each user. Hexnode lets the admin push app configurations along with the apps to each device. The employee need not spend time setting up the apps. The admin can also ensure that app usage complies with the rules and regulations set by the organization.

The apps in the App inventory can be easily associated with devices, users, groups or even domains. If the app is associated with a user, it will be installed on all the devices assigned to that particular user. If the owner of the device changes, then the apps mapped to that user will be uninstalled. Admins can install apps through Hexnode either using actions or through mandatory app policy.

Developers release app updates regularly. These updates might enhance the UI or add new functionalities to the apps. Hexnode allows the admin to deploy app updates to devices without causing any hindrance to the users working on the device. This helps the admin to roll out app updates without compromising the productivity.

Hexnode lets the admin monitor the status of the apps. After uploading the app to the Hexnode app inventory, the admin can opt to get notified on the enterprise app upload status. Apart from this, the administrators can also know the status of apps deployed to different devices from the device details page.
The dashboard of Hexnode gives a bird’s-eye view of the apps in Hexnode. The Managed Apps Summary section displays the app count corresponding to each app type present in the app inventory. There is also a section that shows the top mandatory apps pushed to the devices.

Not all apps that are installed on the devices via Hexnode might be relevant after some time. This might necessitate the removal of the apps. Imagine having 20 outdated apps on each device. Uninstalling the apps on each device is a cumbersome task. Hexnode simplifies this process.

When configuring the mandatory app policy for iOS and Android, Hexnode provides an option to remove all the managed apps once the policy is removed. If this option is enabled, removing the policy will uninstall all the apps installed via that policy. Admin can also remove managed apps from the Android and iOS devices using the remote action Uninstall Application. Apart from these methods, disenrolling a device from the Hexnode portal will also automatically delete all the apps installed via Hexnode. The admins need not misspend time manually removing the apps from the devices.