Though Windows is still the most widely used operating system in the business world, top enterprises such as GE and Concentrix have ushered in a change to this norm by deploying Mac devices in their workplaces. Various factors such as user satisfaction, productivity and employee retention have been cited as one of the major reasons for companies to switch from a Windows dominated work environment to a macOS based one. Mac is better than Windows PC in a number of ways, the chief among these being its usability, stability and longevity. In this blog, we will be covering in depth on some of the reasons why enterprises should follow the lead of these tech giants and start rolling out MacBooks to their employees.

Multiple surveys and researches have proven that MacBooks have a lower TCO. Apple’s strong supply chain allows them to incorporate high quality and one of a kind parts into the hardware. Even though Macs demand a higher upfront premium than a similar spec’d Windows PC, the superior build quality of Macs gives them an edge over Microsoft in the longer run. Since the hardware and software are designed to perfectly complement each other, Apple devices tend to age well and continue to offer long term value for its customers.

By releasing timely patches and free upgrades across OS X, Macs have come to prove their longevity even in business use.

Organizations like IBM have reportedly had to employ a fewer number of IT staff to support MacBook computers when compared to Microsoft Windows workstations. 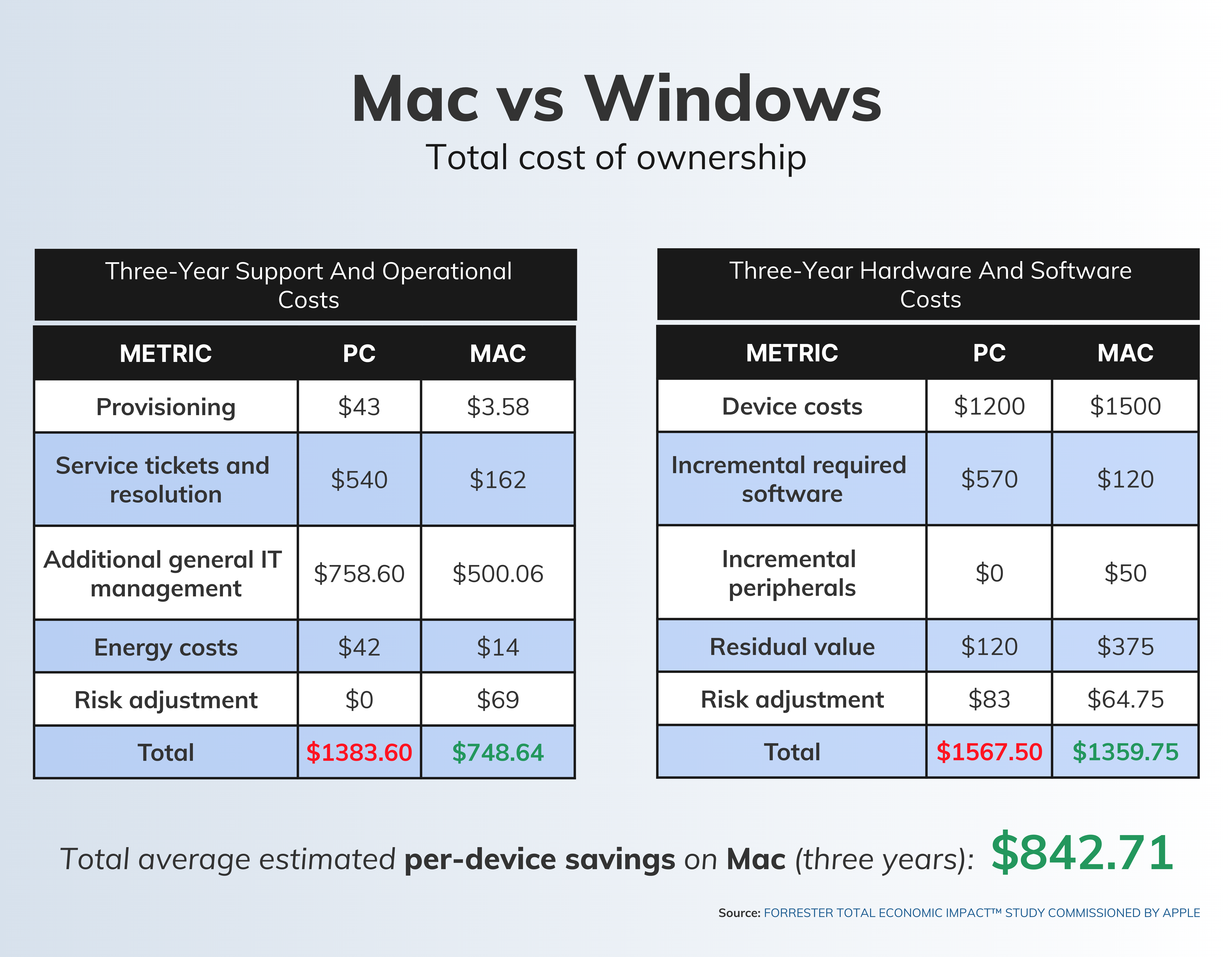 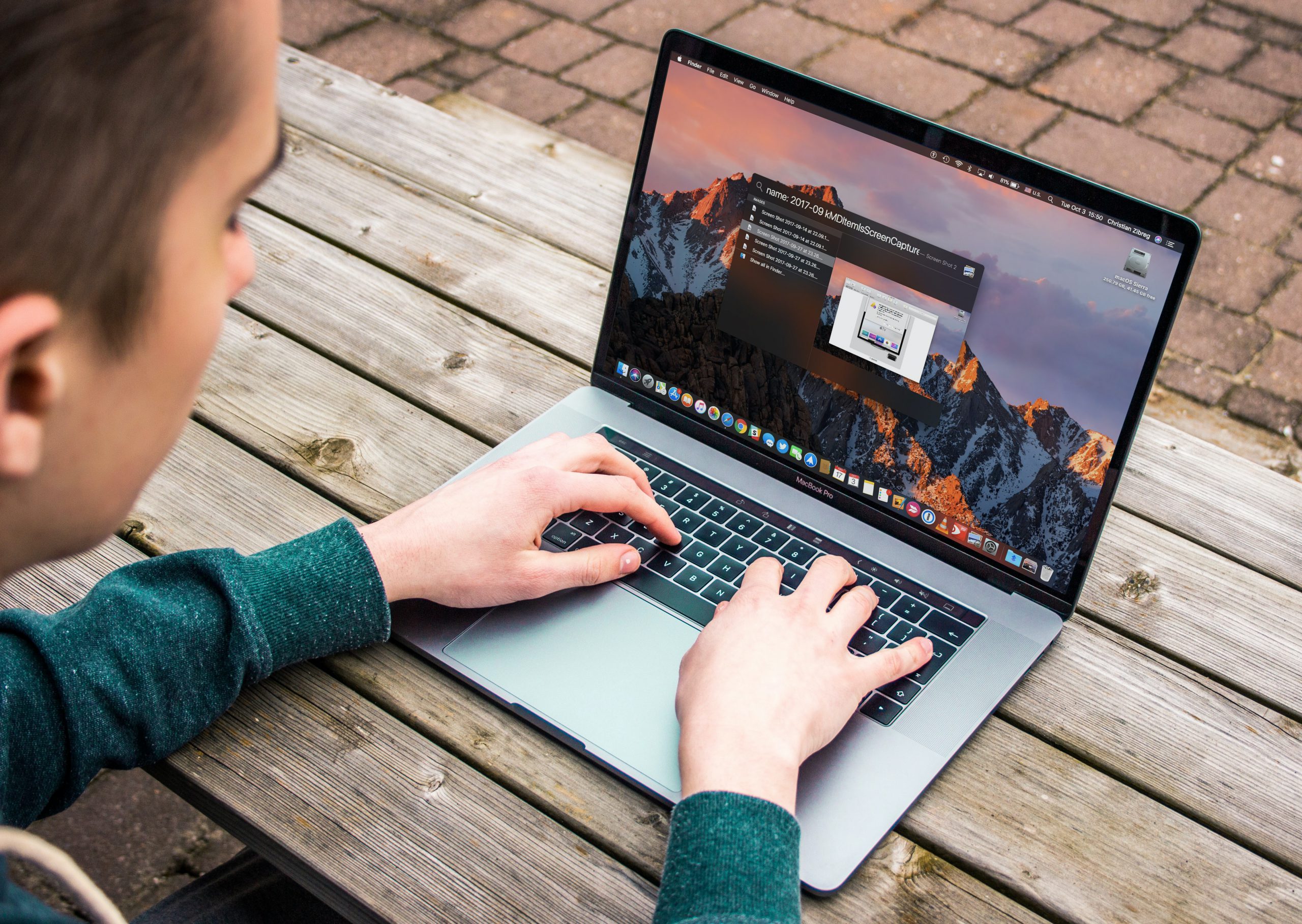 User working on a Mac

The overall user experience of Mac computers can better be termed as intuitive as it works the way just as the users expect it to. Its system preferences have a much better layout, where access to commonly used settings such as networks, displays, and sounds can be easily obtained. The same can be said for other tasks such as ejecting drives or changing the audio input/output devices. When it comes to trackpads, both Apple MacBooks and Microsoft Windows PCs’ use the same trackpad technology from Synaptics. Nevertheless, Apple’s trackpad remains a more preferred choice for usability due to its driver software. Apple spends a lot of time in updating the response parameters in the software, thus users are always kept updated on the latest trackpad gestures. The spotlight feature in Macs can be a time-saver with its fast access to files and applications. By customizing the dock, users can have a clutter-free browsing experience and maintain the visual consistency of their screens.

3. Apple Manufactures its own Hardware and Software

Since Apple is responsible for the production of its own hardware and software, the operating system fits in neatly with the manufactured equipment. This optimal combination creates a better end product for the consumer. One of the defining features of Apple is its tight control over the supply chain. They carefully look into every aspect of the supply chain right from design to retail. Apple in its annual filing has stated that although most essential components to the business are available from multiple sources, a number of components are being currently obtained from a single source. Their selected materials from limited sources makes the products of Apple truly one of a kind. 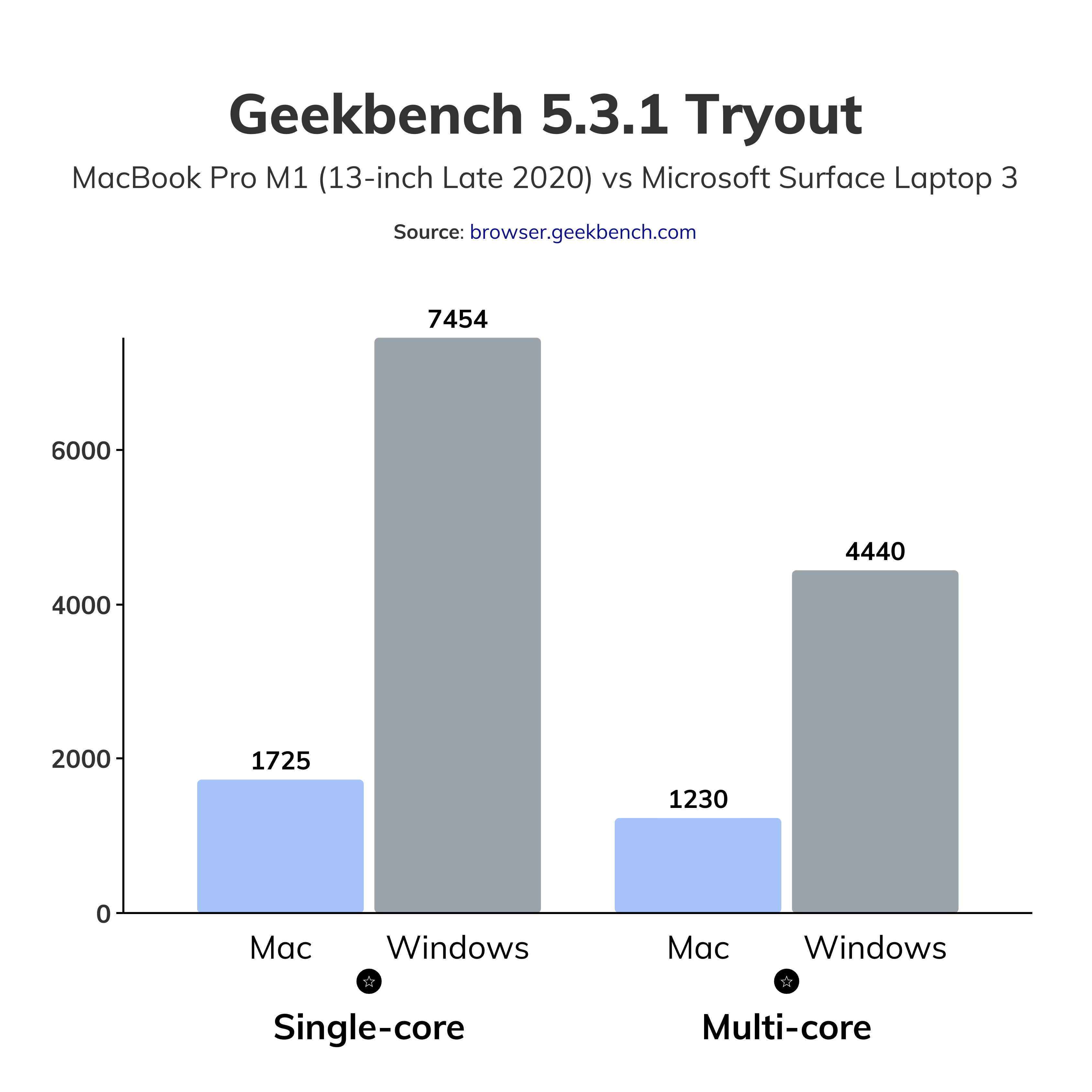 If users are required to use the Microsoft Windows OS platform for certain situations, they can easily do that by installing the operating system on Mac computers. Virtualizing Windows on Macs not only takes care of the software requirements, it comes with plenty of benefits such as picture-in-picture computing where users can open Windows as if it were another desktop application and comfortably work on both the operating systems simultaneously by adjusting the screen to accommodate both the platforms.

MacBooks come pre-loaded with a wide range of handy apps that would be useful for an enterprise to ensure a smooth work environment. This dynamic set of built-in apps will boost the efficiency of enterprise users. With apps like Keynote, presentations can be created on the go. The Calendar app provides a convenient platform to manage and keep track of the day-to-day tasks.

When a survey was conducted to find out how Apple products were being used in the workplace, 84% of the respondents reported feeling satisfied. As more enterprises are moving on to issue MacBook computers to their employees, users should have an idea on how to get the best use out of their computers to increase productivity. 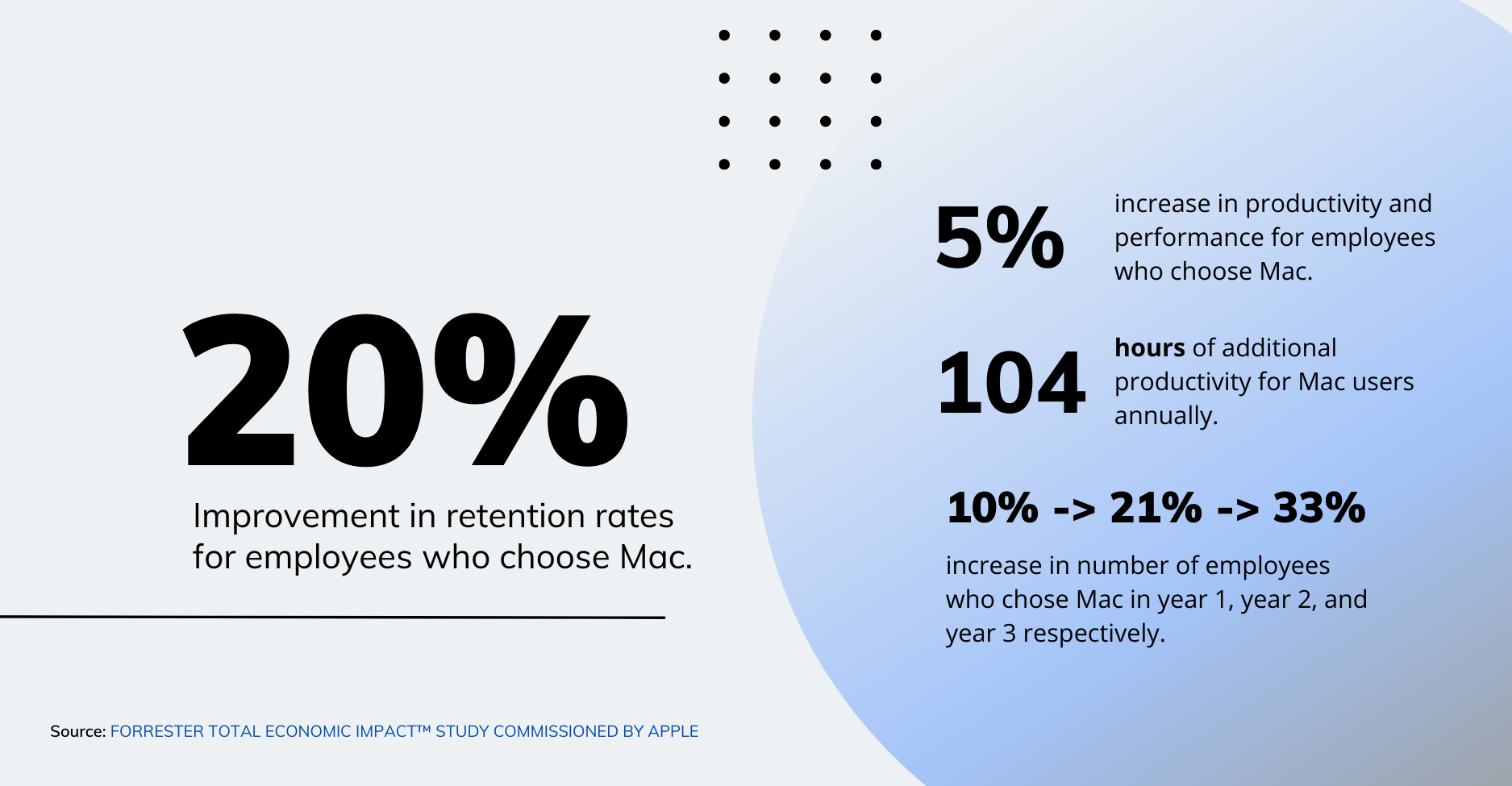 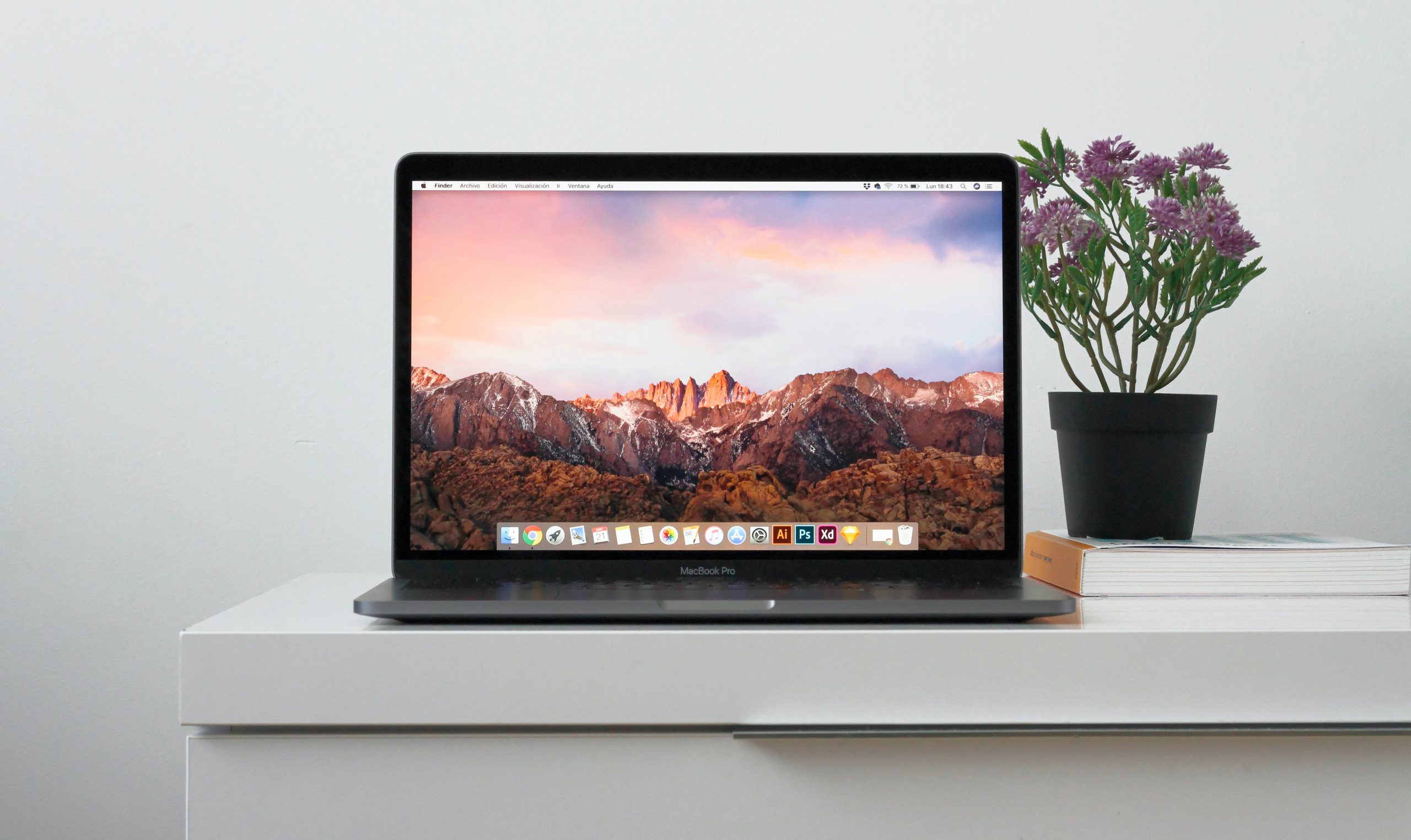 The average MacBook user is less likely to get exposed to security threats as there are fewer malware programs targeting macOS. All the apps found within the App store are sandboxed, thus even if there was a malware running, it wouldn’t be able to get into the file system. However, this shouldn’t stop users from installing a sound anti-virus software. MacOS just provides its users with that extra blanket of security of being exposed to fewer attacks.

8. Upgrade to Newer Versions of the OS

Apple has released 20 versions of macOS so far, the latest being macOS 13 Ventura. These upgrades are free and can be easily installed from the system preference. This would only be applicable to get updates for macOS Mojave or later versions. Users using earlier versions of the macOS such as Sierra and El Capitan would have to go to the App Store application to get the latest update. Enterprises managing a large number of Mac computers can easily set up automatic updates by selecting the “Automatically keep my mac up to date” option from the System Preferences. With macOS, users can get regular software updates, bug fixes and patches. The free and convenient method of upgrading to the latest version of OS is yet another reason why Mac is better than Windows.

With Apple’s conducive Handoff feature, employees can complete their tasks on the go without worrying about leaving them unfinished. Handoff is a part of Apple’s suite of continuity features that help iOS and Mac devices to work together. Various tasks and data can be moved seamlessly from one device to another. Other parts of this feature include the ability of Macs to answer the calls coming to your iPhone. Some of the pre-installed apps that come with iOS and Mac devices such as Calendar, Mail, Contacts, Phone, Reminders, Notes and Safari, the default browser are Handoff compatible. The easy integration of Apple’s ecosystem provides the convenience of universal apps. You can purchase a single app for your iOS or macOS device and use it smoothly across all Apple platforms.

macOS management for the modern enterprise

Though the adoption of Mac computers in the workplace makes sense, it would be rather difficult to incorporate them into a Windows dominated environment. In order to make their deployment easier, enterprises must ensure to depend on powerful management tools like Hexnode UEM.

A beginner’s guide to Mac management

Hexnode provides a centralized platform for IT Admins to remotely manage the Mac devices, automate app installations and deploy the right policies needed by the organization to function productively. By managing the MacBooks with Hexnode UEM, enterprises can:

Hexnode’s integration with Apple Business Manager enables admins to configure any MacBook purchased from Apple or an authorized Apple reseller, and easily enroll them to Hexnode’s device management portal without even touching the device.

A guide to Zero-Touch deployment for Macs

The absolute guide to Unified Endpoint Management (UEM) in enterprise

App distribution and management is an important part of an IT admin’s job. Admins can deploy apps, manage app licenses via VPP, blacklist or whitelist apps, disable app store for non-admin users, and more.

Role of UEM in software distribution and upgrading

The need for securing corporate access via public and private networks is important. Enforcing proper network security ensures that businesses are protected from potential online breaches.

Admins can configure Setup Assistant to skip specific steps and push policies to automatically set up user accounts on Mac computers, including email, contacts, calendars, and more. IT can also configure wallpaper, personalize fonts, update the Dock settings and login window preferences, set up a screensaver, and more, to customize and personalize devices according to corporate requirements.

Admins can set up compliance parameters and monitor device compliance in real-time, and get alerted immediately at instances of non-compliance.  Moreover, non-compliant devices can be automatically rounded up via dynamic groups to take quick remedial actions.

Admins can generate a wide range of reports on the go to view granular details including user data, app statistics, security violations, and various compliance issues, and export the reports as PDF or CSV files for documentation purposes.

A device admin’s guide to auditing and risk management 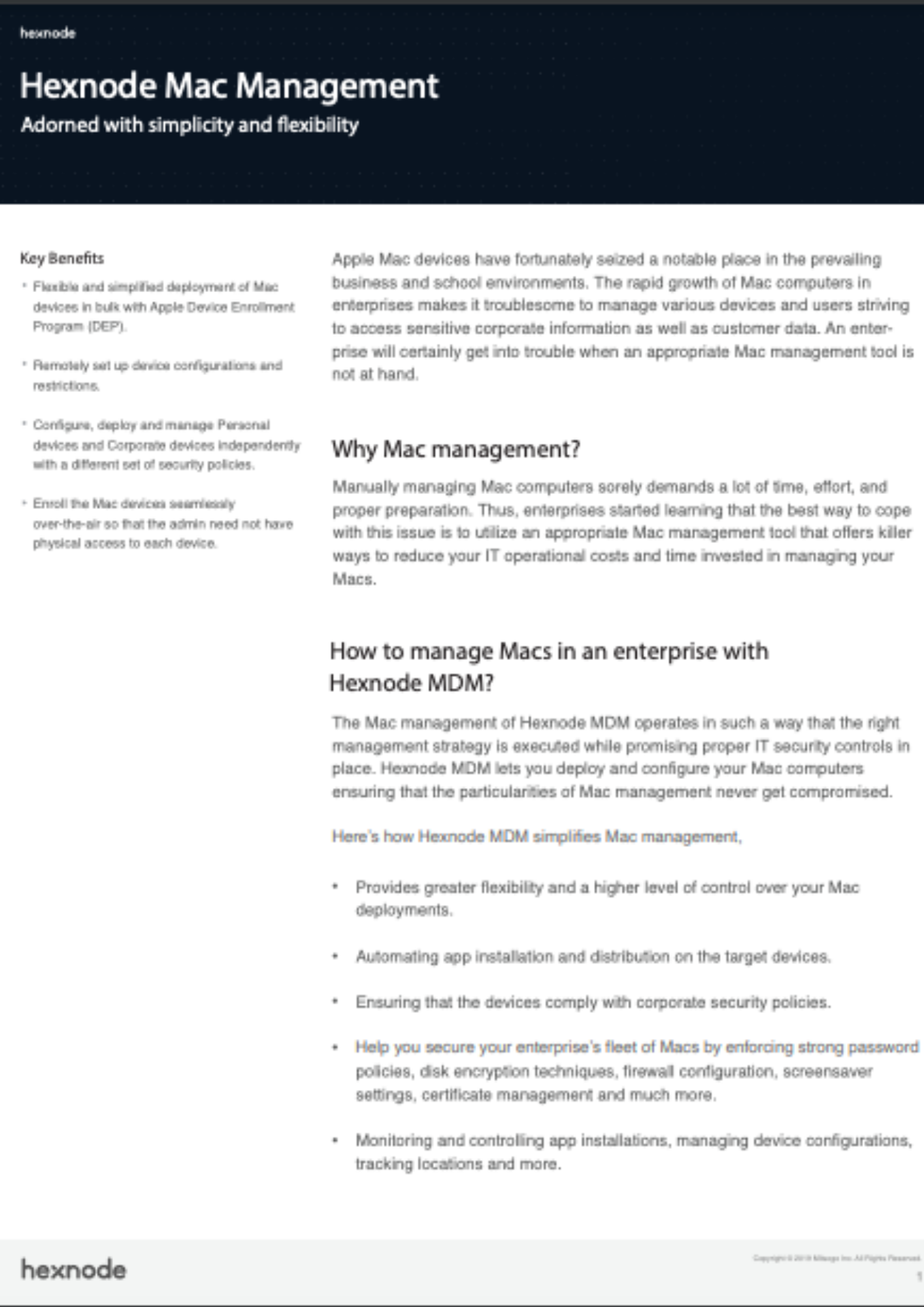 Get started with Hexnode’s Mac Management solution to save your time and the associated IT operational costs of managing your Mac devices.

Regardless of all the benefits that a MacBook offers over Microsoft Windows computers, if I were asked to choose between Windows and MacBook computers for work, it would by no means be a quick decision. Determining the right platform and OS for your business requires lots of research. It depends on what kind of apps and software your business requires, the present IT infrastructure of your company, and more. For example, it would make no sense for a company that runs on Microsoft infrastructure to switch to MacBook computers.

However, for a business that isn’t burdened by any of these difficulties, the best way to go is to let employees choose their own preferred platforms for work purposes. The only pre-requisite you must make sure of is that your company has the right tools to secure and manage the platforms and OS your employees choose.

Breeze through the rough terrains of Mac app distribution with Hexnode

How to deploy Windows apps with parameters (scripts)