Windows or Mac? It’s a hard one isn’t? The ever-raging debate on the merits of Windows PCs and Mac machines have been around for quite some time. Ten or more years ago, people argued about it in print and now the dispute continues in various online platforms. Faithful Mac users will point out its design, intuitive interface and tough security. PC dedicated users on the other hand speak highly of its customizability, flexibility and the ease of navigation. As technology has improved greatly in recent years, it is becoming increasingly harder to select one platform and justify its merits based on the expense of the other. Both Windows and Macs have gone through a series of OS updates, making their software much better than it was before. In this blog, we shall look into the cost comparison of windows and mac and evaluate the benefits which both these platforms could bring to its enterprise users.

Even though many organizations choose laptops over desktops to allow their employees more flexibility, desktops are still popular. If you are searching for a new desktop for your employees, you can expect to pay about $400 for a basic model with limited storage capacity. High grade desktops with a larger hard drive can easily cost about $3500. The price range of desktops can also vary based on its operating system. Models running on windows costs comparatively less than the ones running on a macOS platform. Depending on the feature requirements, the costs of Apple desktops can differ from $1500 to $3500.

Enterprises with a work environment offering team collaboration and work from home options would do better with deploying laptops. Laptops with a basic model can cost about $300 and top of the line models with high speed and a large storage capacity will be $3000. Apple laptops usually fall in the middle of this price range, where consumers can expect to pay anywhere from $1000 to $2500. Laptops running on the windows operating system would have a much wider price range with the costs depending on factors such as the brand and the features. Although Apple offers great hardware options, they are less compared to the ones offered by Windows PC. For internal components such as graphics card and storage, Windows offers more scope in configuring a system with the components users want and offers more flexibility to upgrade the system at a later date.

Macs are expensive and this is usually cited as one of the main reasons why many businesses hesitate to adopt Mac machines in their workplaces. A business grade MacBook or Mac Mini setup will cost about $2000. However, if users compare this with a business grade PC from Dell or Lenovo, the hardware cost would be about the same. There would only be a slight price difference between the two based on the level of portability and configuration. Often cost comparison between Windows and Mac have been done unfairly as many tend to compare Macs with non-business grade PCs that lack the functionalities needed by an enterprise user.

Both windows and macOS offer a clear setup experience. Microsoft’s cool feature of letting users install the operating system via Cortana and the ease with which Apple provides its users to upgrade to the latest macOS version through System Preferences makes the setup processes of both these platforms in par with each other. Both these OSes can automatically recognize and install drivers for hardware peripherals like mice, storage and keyboards.

When you do a cost comparison of the OS and built-in productivity utilities of windows and mac, Macs comes out as the obvious winner. Though Microsoft provides an array of decent apps such as Sticky Notes, Skype and Translator, Apple keeps its users hooked with their better editing capabilities, preview utility and a suite filled with in-built productivity apps. In terms of third-party software compatibility, both windows and Macs have a rich software ecosystem. People have long believed that custom business applications only worked better on windows and Mac was the more preferred choice in creative fields. However, many users would be surprised to know that macOS has plenty of good general business software and Windows offers plenty of tools for editing, especially photos.

Mobile device integration is an important feature to look into while doing a cost comparison between windows and mac.  Windows made great strides in integrating their operating system with mobile devices. Apps compatible with this feature allowed users to start their work on their phones and continue it on their PC’s browser. Users of Android devices can easily integrate with Windows via the Launcher app where documents, messages and webpages can be shared across devices. In spite of these initiatives taken up by Microsoft, the mobile device integration feature of Apple still stands out, especially with the availability of universal apps where apps can be installed and used across all Apple devices.

The Windows 10 product comes in two main versions – Home and Pro. Windows 10 Home, costing $139 is best suited for accomplishing daily tasks that can be achieved on a home computer. Here is a list of features that a Windows 10 Home computer supports. Windows 10 Pro costing $199.99 includes all the features of Windows 10 Home along with a set of additional benefits that are better suited for businesses such as allowing users to customize the device to meet their organization’s needs, have greater control over Windows update deployment, support group policies to push necessary security and networking rules, easily set up kiosk mode, and have an Active Directory support to allow IT admins to manage the user’s access to important enterprise resources. In Apple the MacOS updates have been free since the release of macOS X 10.9 Mavericks.

Macs are well known for providing a more robust security against malware attacks. Apple updates its antimalware signatures frequently to keep its platform safe from various viral and phishing attacks. Somewhere down the line, Windows developed a reputation for being a target to malware attacks. It is true that in the early days Windows was more susceptible to these attacks, however in present times neither operating systems can be completely safe from these vulnerabilities.

The Meltdown and Spectre vulnerabilities is one such example. Macs have used the same intel processor as Windows for more than a decade and Apple had to release the meltdown and spectre patches for macOS just as Microsoft and other companies had to do with their products. Several Apple products that didn’t use the intel processor were also affected and had to have their operating system updated. Microsoft battled with harmful attacks from malwares such as Melissa, Code Red, Nimda and Blaster and learnt the lesson by stepping up its security and introducing several security features within its software.

Enterprise using Windows 10 can keep their business secure with the help of Microsoft 365 security center. It gives a detailed view of the security health of the organization and set alerts when suspicious activities take place. There are three pricing plans available – Business Basic, Business Standard and Business Premium, with the basic plan costing $5 per month/user, standard $12.50 per month/user and business premium costing $20 per month/user. The latest Mac models has security built into it via the Apple T2 security chip. The secure enclave coprocessor found within the T2 chip provides a solid groundwork for secure boot and encrypted storage capabilities. Though Windows and mac are both susceptible to malware attacks, Macs have been known to provide better security on the long run.

9 reasons why mac maybe better than windows in an enterprise

Read on to find out why enterprises would do well in deploying mac devices in their workplace. 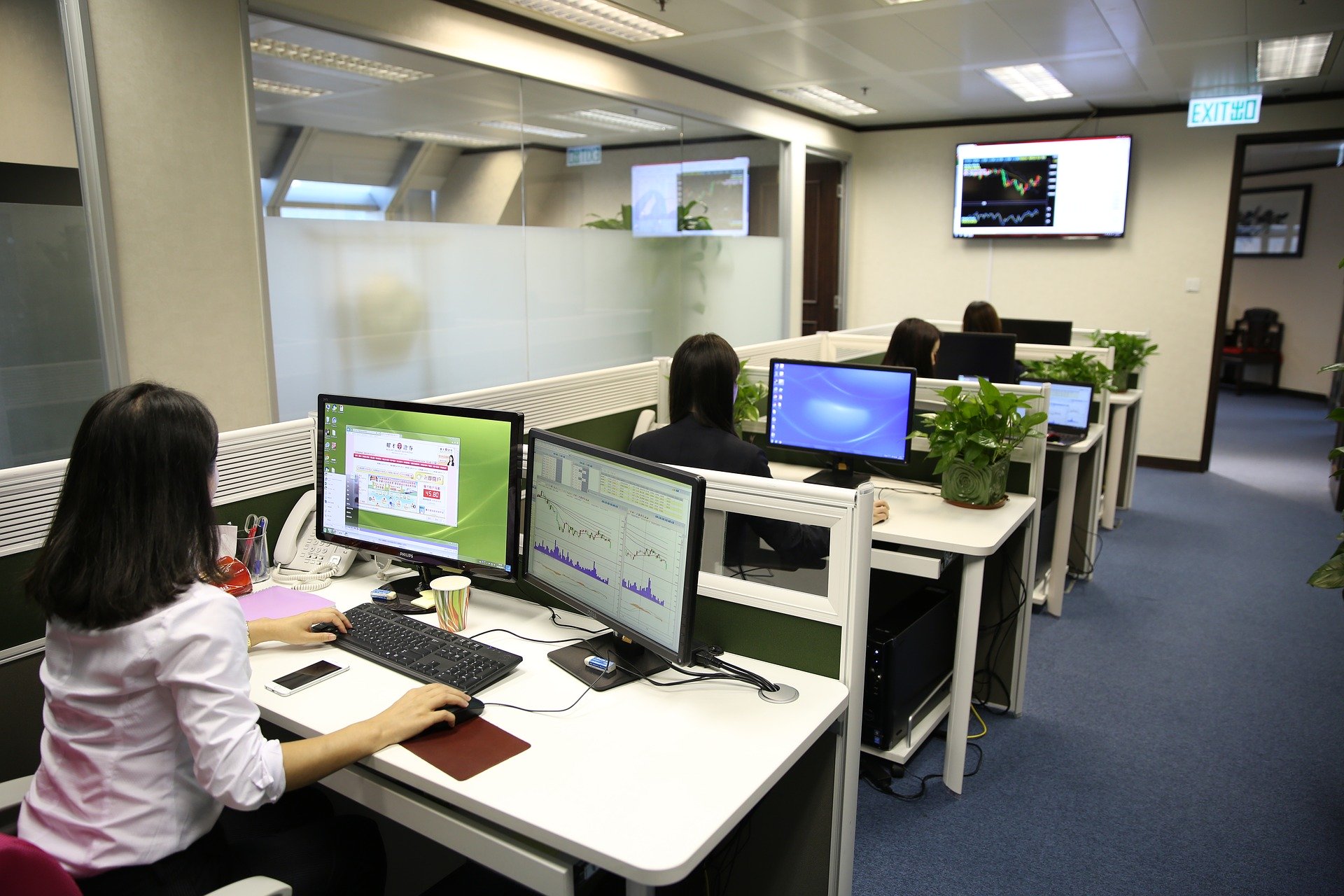 Comparing the enterprise device management cost of windows and mac

An adequate management solution is crucial for both Windows and Mac devices. By setting up the right management approach, IT Admins of your enterprise can seamlessly deploy the devices, configure appropriate settings and update the operating system. Both macOS and Windows come with in-built security features that protects the device the minute it gets turned on. Mac provides security to its users via FileVault, System Integrity Protection (SIP) and Privacy Controls. While businesses using Windows 10 in their workplaces can protect their systems from cyberattacks by making use of the Windows Defender Smart Screen, Windows Defender Application Guard and the User Account Control. Both operating systems also have the framework to allow MDM providers such as Hexnode to manage the devices remotely.

Apple Business Manager (ABM) is a web-based platform for IT admins to deploy and manage Mac computers and other Apple devices from a centralized location. Hexnode MDM uses this platform providing IT admins the ease to deploy Mac devices, customize the app settings, and purchase and distribute contents through Hexnode MDM’s console. The integration of ABM with Microsoft Azure Active Directory (AD) allows enterprises to authenticate their employees and create employee accounts with Managed Apple IDs.

When it comes to Windows, Microsoft provides its own management solution in the form of the form of Microsoft Intune and System Centre Configuration Manager (SCCM). Though SCCM has been used for managing Windows PCs for a long time, the addition of Intune further expanded the management capabilities to a cloud-based environment. Organizations usually use these two tools together to manage their Windows devices. While the costs with SCCM can differ, the open No Level License and the Software Assurance price of a SCCM Client Management License is $62 per license for a service of two years. Though Intune starts at $6 per month/user, its two add-on packages to improve security and management capabilities, makes it even more expensive. It would be much more feasible to rely on an affordable MDM solution like Hexnode where organizations can efficiently enroll, manage and secure the deployed devices starting at only $1 per month/ device. Hexnode MDM supports the management on devices running on Windows 8.1 and above wherein admins managing the windows devices can associate corporate policies onto it to ensure that they maintain the security standards of the enterprise. Unauthorized changes can be prevented on the targeted devices by administering BitLocker, Microsoft’s built-in volume encryption tool. In addition to the seamless distribution and management of apps, the productivity of enterprise users can also be enhanced by locking down the Windows devices into a single app mode to restrict the usability of the device to essential tasks and functions.

Doing a detailed cost comparison between windows and mac and having to decide between the two can be quite hard as both platforms  have their own unique functionalities that sets them apart from each other. The choice for selecting Mac machines or Windows PCs for business use would depend on your budget, the line of work and software preferences. With Windows, users can work better and have access to the operating system’s versatility. Users of macs on the other hand can benefit from its sleek design and better security. Whatever the choice maybe, remember to choose wisely.