How to downgrade apps in iOS and Android?

The need for downgrading apps

Apps can be downgraded. Yes, you read that right. Updating the applications to the most recent version allows access to the most recent features while improving app stability and security. However, it is not as smooth as it sounds and, in some cases, you might need to downgrade apps. Furthermore, the latest updates can come with bugs as the application developers may overlook to repair significant errors. Also, the devices might not be compatible with the new update, and this might cause the app to crash multiple times. Additionally, the apps take up more space with each update.

How to downgrade iOS apps?

Now that we have seen why we have to downgrade an app, it is essential to know the different ways for downgrading.
In iPhones and iPads, there are multiple ways in which you can downgrade apps.

Downgrade An App on iOS with iTunes

If the App version you are looking for is not in Get Info, select the app and click Show in Finder/Windows Explorer to erase the existing IPA file in the folder. Delete it from the Recycle Bin/ trash as well. Once again, come back to the apps tab and click on Show. At this point, iTunes will prompt you to retrieve the IPA file. Select Locate and navigate to where you saved the old IPA file. Next, go to the Apps option in the Device tab and follow the previously mentioned steps.

You can download the IPA files to downgrade apps using Apple Configurator.

How to downgrade Android apps

Downgrade an Android app (and keep the existing data)

To downgrade an app to a previous version without erasing its data, you must install the older version on top of the newer one. Typically, Android does not permit this, and the installation would either fail quietly or display an error. Fortunately, the system package manager has a secret flag that, when supplied to the package installer, instructs the Android OS to allow an older version of a program to be installed over a newer one. 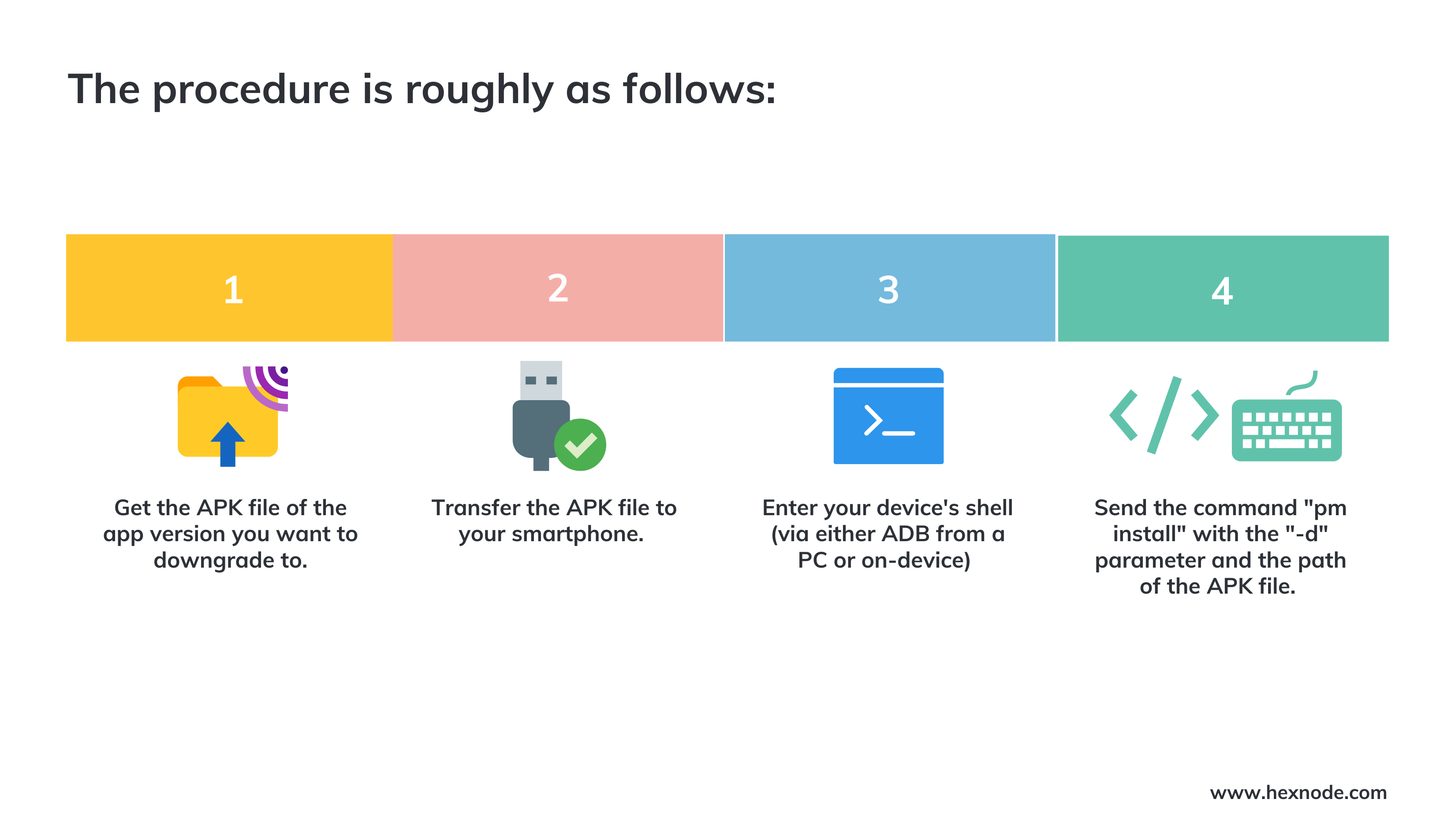 Steps to downgrade an Android app and keep the existing data

Snippet of the Powershell script to downgrade an app

Once the command is executed, the app gets downgraded to the required version. 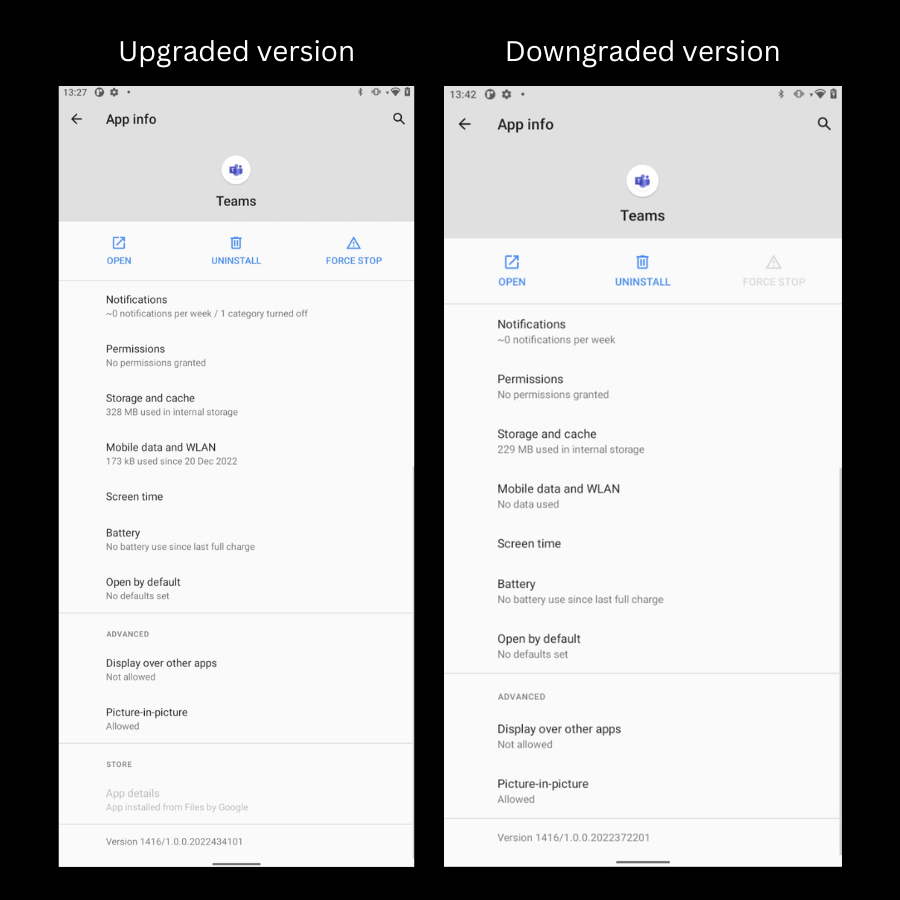 Google needed to make sure that any changes to Android’s modular system components could be reversed if something went wrong during the development of Project Mainline for Android 10. So, when there are 5 “Application Not Responding” (ANR) errors or process crashes inside 1 minute of an update, or if any native service fails frequently following an upgrade, Android’s rollback capability is meant to be triggered automatically by the system.
However, Google has included a manual rollback method using a shell command. To perform a rollback,

When one performs a rollback, they restore the previous data by installing the earlier version of the program and relocating the backed-up data files. Any modifications to the app’s data after activating rollback will be replaced.

Third-party programs can also be used for this purpose. There are several Android and iOS Downgrade applications to select from. You may download and install any of these programs for free or for a one-time cost on a compatible computer.

Why use Hexnode to downgrade Android apps?

Imagine all your corporate device got updated to the latest version of an application that has several bugs. It will be very tedious for the IT admins to downgrade the apps on every device individually. 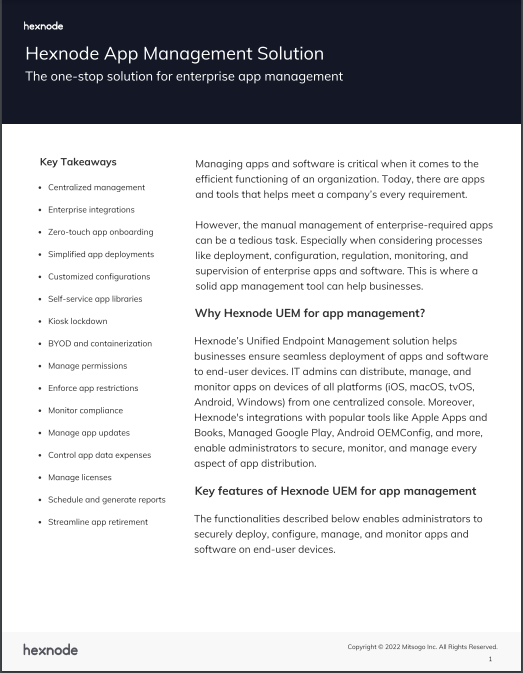 Hexnode’s smart security package adapts to the demands of the modern workplace. Organizations can support granular management capabilities over all aspects of device management using Hexnode. The UEM solution lets the IT admins downgrade an app on the managed Android devices if they face any problem with the latest update. The benefits of downgrading apps through Hexnode are:

How to downgrade using Hexnode

What is an enterprise app?
A company designs an enterprise app, also known as an in-house app, for usage within the company. They cannot disseminate some programs intended for internal use to the general public. As a result, they are not available in the Play Store.

If the corporate program you released includes security flaws or other faults due to some bugs from the developer’s side, it might lead to a massive IT disaster. You can downgrade corporate apps and distribute them to Android smartphones using Hexnode. To accomplish this, one can upload the earlier version to the Hexnode app repository.

In conclusion, one can downgrade apps on managed iOS devices through iTunes or Apple Configurator. For Android devices, one can do it using Hexnode UEM, scripts or using 3rd party apps. There are several reasons why someone might need to downgrade an app, such as bugs in the latest update, compatibility issues with their device, or lack of storage space. By following the steps outlined in the article, you can easily find and install the previous version of an app on your managed iPhone, iPad or Android phones.

It’s important to note that one cannot downgrade all apps and not all older versions of apps are available for download. It’s always a good idea to double-check that the app version you are trying to install is still available and compatible with your device before proceeding.

Looking for a software to downgrade apps?

Give Hexnode a go! Try out the 14 day free trial of Hexnode UEM to downgrade your Android apps easily.

Product Evangelist @ Hexnode. Busy doing what looks like fun to me and work to others.

Leveraging the most out of Managed App Configurations: An Android Enterprise focal point

Busting the myths about sideloaded apps

What is app wrapping?

What is Android Enterprise? Everything you need to know