What is Federated authentication? What is its role in identity management?

Would you believe it if I said that an average employee has to manage close to around 190+ passwords? Well, a study conducted by LastPass confirms this number. When a person has these many passwords to handle, there is a high chance that he might forget some.

Forgetting passwords is a hassle not only for the employee but also for the IT team. If an employee forgets their device password, only the IT team would be able to reset it. When it comes to safety and security, a poor password habit is extremely dangerous. And this is where tools like federated authentication and Single Sign-On (SSO) come into play.

Explore Identity and Access Management with Hexnode
Table of Contents

More and more companies are starting to understand the significance of issues related to bad password management habits. This is why features like Single Sign-On and Federated authentication gained more popularity.

Both these systems use one set of credentials to log in to multiple apps and services. In this way, a user has fewer passwords to remember and thus minimizes the problems caused due to bad password habits.

What is Single Sign-On?

Single Sign-On is a concept that allows users to create accounts and access tools, apps, or resources within a service, using the same set of credentials from another service in the same domain. It’s like logging into your Google account to access different services offered by Google.

Single Sign-On can be a great addition to your business as it can help in so many ways, from increasing the productivity of employees to tightening security.

What is Federated authentication?

Federated authentication works on the basic principle of trust between identity providers and service providers. An organization using this authentication should make sure that the IdP they plan on using works for all the tools they use.

As mentioned earlier both SSO and Federated authentication allow users to access multiple tools and resources using a single set of credentials. This might make a person think that both of these are the same things and might use the terms interchangeably.

Federated authentication commonly finds its use in organizations where the employees are required to use a lot of tools provided by different vendors.

How does Federated authentication work?

Federated authentication mainly consists of 2 systems: Identity Provider or IdP and Service Provider or SP. IdP is the one that validates or authenticates users based on the credentials entered by them, whereas the SP refers to the website, tool, or app the user is trying to access.

The working of Federated authentication is very easy to understand. Initially, the users would be asked to log in to the IdP or Identity provider’s server with their credentials. Once the IdP authenticates the user, a secure token or an XML file is created based on the type of protocol used by the IdP. 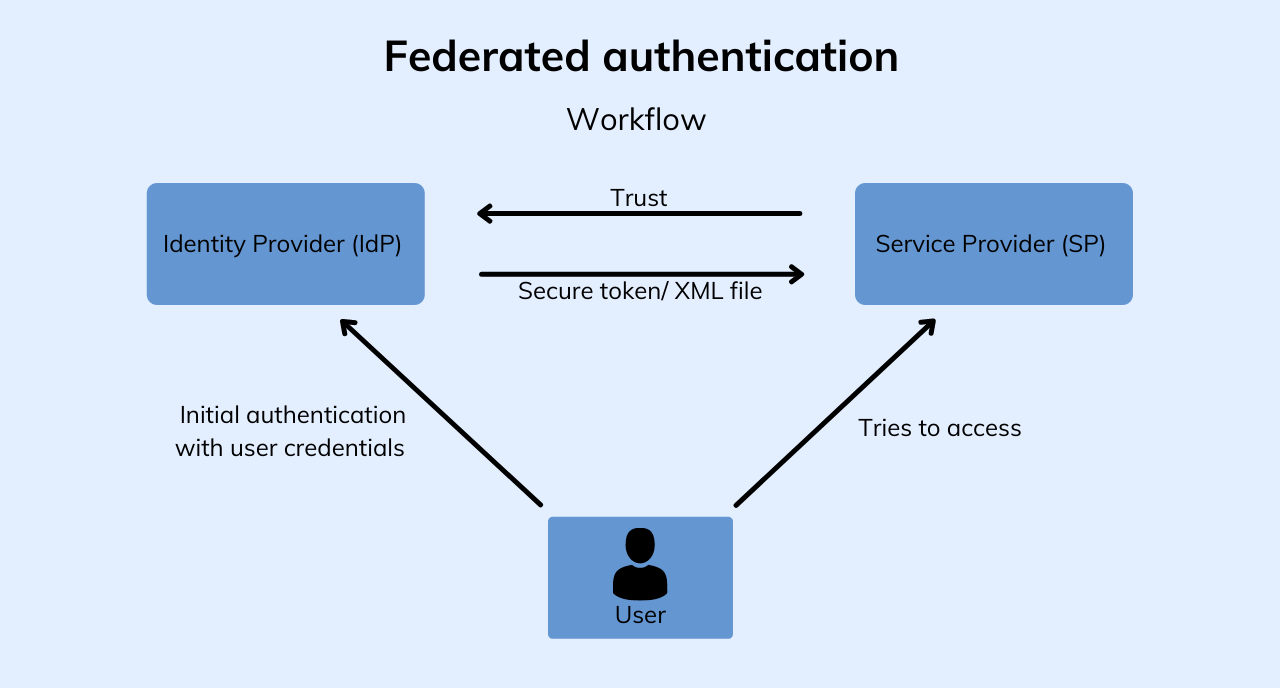 Federated authentication work flow
So, whenever an authenticated user tries to access a service provider, the IdP communicates the token or the XML file with the SP and thus the user would be able to access the tool or resource.

The communication made between the IdP and service providers is always encrypted and the encryption keys are used by the SPs to ensure that the attempt was made by an authenticated IdP itself.

SAML, OAuth, and OpenID are the three most commonly used protocols.

The authentication makes use of the SAML protocol. The main highlight of this integration is that users can now use one set of credentials to log in to both Apple and Microsoft devices as well as the services offered by both.

There are many advantages of using Federated authentication, but a few of the most notable ones are:

Sign up for a free trial and explore the Identity and Access Management features offered by Hexnode.

Switching to Hexnode: The Dos and the Don’ts