Android seamless updates: Everything you need to know

Many of us have seen and ignored this notification on Android because of how time-consuming this process can be. We know that our device needs to be updated as soon as possible, but once we hit the “UPDATE” option, we can’t use our phone until it is completed. Thus, the user will become exhausted by looking at the screen waiting, waiting and still waiting…

Android has brought the “Seamless Update” to address this issue. Under this, the newly available update can be installed in the background and will be applied after a reboot. Through the most recent updates, it is possible to boost the performance and stability of Android devices. This can also correct bugs and add new or improved functionality.

Additional info 📖
The Android seamless updates feature is available for Android 7.0 devices and above.

What is an Android seamless updates?

One fine day, your Android phone request you to reboot your device. Once you have done that, poof🪄your phone is under the latest Android version. No, it’s not magic; this is essentially what seamless update does.

As the name implies, seamless updates almost eliminate the downtime associated with the standard over-the-air (OTA) update technique and make OTA updates seamless for users. With seamless updates, the software gets downloaded and installed in the background while Android runs. It is the opposite of shutting down Android and starting a special recovery environment. In this process, the OS update is finished after a quick reboot, the only interruption that happens.

Android seamless updates, also referred to as A/B system updates, guarantee that a functional bootable system is kept on the device during an OTA update. This strategy eliminates the possibility of a device becoming inactive during an update, reducing the chance of device corruption and repair. A/B updates are successfully used by other operating systems of commercial grades, such as ChromeOS.

Behind the scenes of the Android

The software update process in Android is quite simple. Based on the partition, there are two types of system differentiation, i.e.,
A-only partition and A/B partition.

“Partition” is a division that is made in the storage system. Android device’s internal storage is divided into numerous partitions, including boot, system, recovery, cache, and data. This is how the partitions are organized on a device with an A-only partition.

However, on the A/B partition, there are two copies of this partition called slots A and B, which are identical duplicates of one another. These slots won’t have recovery and cache partitions. The A/B partitioning enables seamless updates for Android. This method establishes backup space inside the phone’s internal storage if the new update fails. This is why the A/B partition doesn’t contain a cache in it. 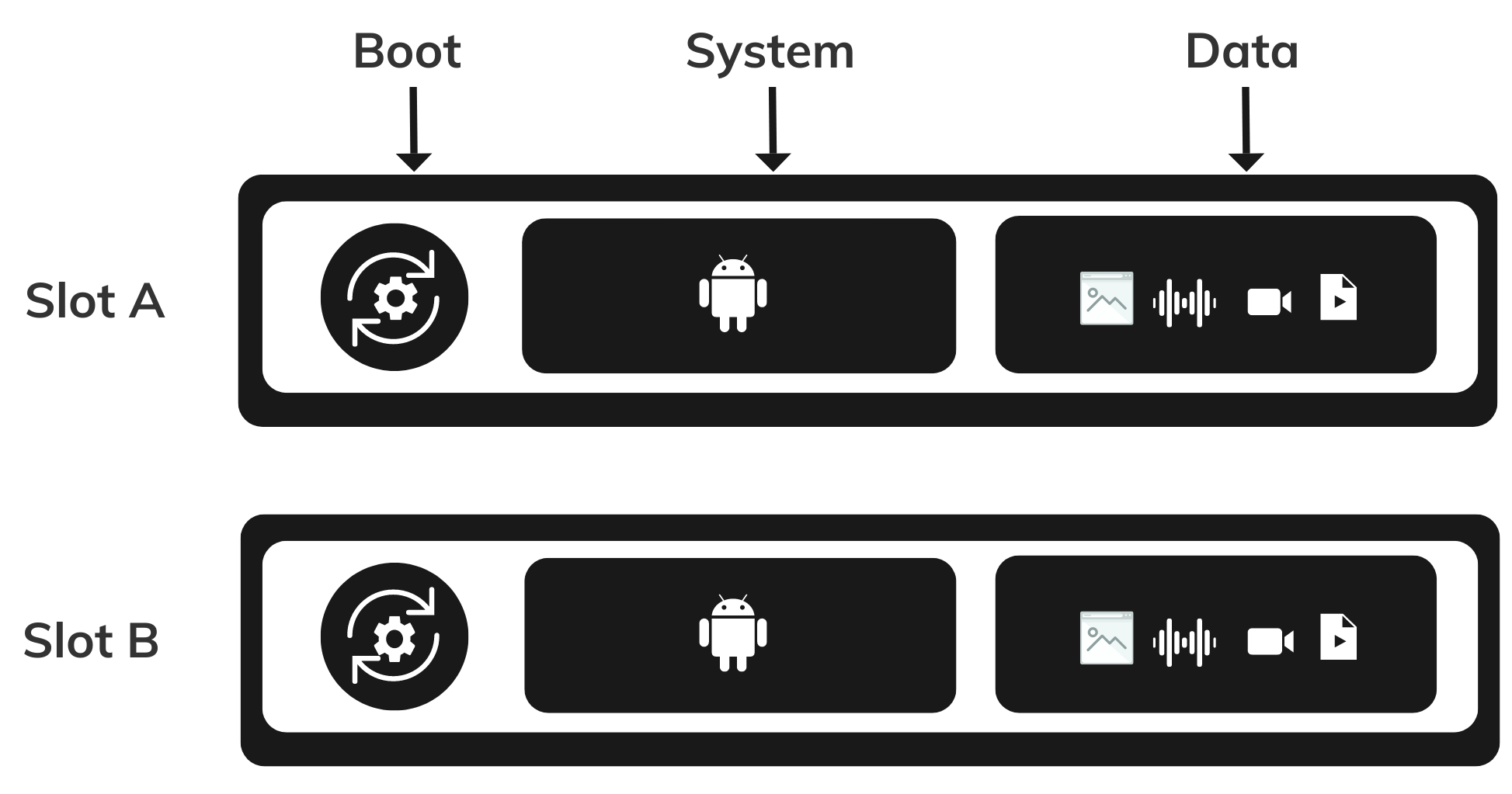 Working of the partitions in Android

How does A-only partition works?

When an update is available in the A-only partition, it gets downloaded into the phone’s internal storage and then requests a restart to install the update. The phones would not be usable at all, during the installation process. If something wrong happens during installation, the phone gets corrupted, and the personal data will be lost. Then the operating system needs to be reinstalled after formatting to use the phone again.

How does A/B partition works?

In an A/B partition, the user will actively use one slot (let’s say slot A) while slot B is dormant. When a software update is available, the inactive slot (slot B) downloads and installs it. Once the installation is completed, a reboot notification will be issued. During this, Android verifies whether or not the newly updated slot has been correctly flashed. If so, the phone will boot into slot B (the new active slot with the updated OS), which will include all the capabilities added by the OTA update. Additionally, it will keep all user data at the same time. Slot A will then become inactive.

In the same scenario, consider some error in slot B during this update. Then slot A will continue to be the active slot and a message of “System update failed” will be received on rebooting the device. This will prevent the phone from getting corrupted and enable a further update attempt.

The main benefits of using Android seamless updates include:

How to check whether your device supports seamless updates?

With the seamless update, the user will no longer see a screen showing “Android is updating”. The Moto Z2 Force, the Essential Phone, and the Xiaomi Mi A1 are examples of devices adopting the partition system outside Google’s first- and second-generation Pixels.

In the terminal method, the user needs to run the command:

in the terminal emulator app or ADB shell. If the device supports dual partition, the command will return true.

The user can use the Treble Check app from Google Play Store for the app method. Users can use this app to find out whether Project Treble is enabled as well as whether their device employs the A/B partition scheme for seamless updates or the A-only system partition.

Android’s internal architecture has undergone a significant revamp with Project Treble. It isolates the Android OS’s core code from hardware-specific code. This was included in the Android 8.0 release, aiming to make it simpler, quicker, and less expensive to update devices to a new version of Android.

Hexnode as a wingman for seamless update

Many corporate settings encourage keeping their technology up to date. However, devices with outdated software will have several security flaws that could prevent them from operating efficiently. Scheduling and automating OS updates with Hexnode UEM is the best solution for these issues. Hexnode UEM helps enterprises schedule OS updates on Android devices enrolled in the Android Enterprise program as ‘Device Owner’.

Device owner (Fully managed device) and Profile owner mode (Work profile) are the two main management modes provided by Hexnode with Android Enterprise. The organization will have complete control over the device in device owner mode. Meanwhile, the profile owner mode will store work apps and data separately from personal apps and data. The personal space will remain private to the user and there won’t be any control for the organization over the personal data.

Hexnode UEM streamlines the process of deploying extensive OS updates to Android devices. The software updates can be sent to a specific group at any moment to avoid bandwidth overuse since there are many devices in the organization. In addition, Hexode UEM provides the option for IT admins to delay updates for up to 30 days, update automatically, or update during inactive hours.

Get started with Hexnode’s Android Management solution to improve efficiency, increase productivity, save time and overhead costs of managing your corporate devices.

Google brought the seamless update to make OTA updates effortless. Since A/B updates apply in the background and become active on the subsequent reboot, they have the advantage of appearing to the user to be almost instantaneous.

Now, Google might mandate Seamless Updates for all devices running the Android 13 operating system. However, this requirement might not apply to devices released with an earlier vendor’s software.

Give Hexnode a go! Try out the 14 day free trial of Hexnode UEM and securely manage Android devices.

What is Android kiosk mode?