This year, Apple’s Worldwide Developers Conference brought many innovative goodies to the table. Amongst them, the declarative device management model seems like one of the super goodies which could create a lasting impact on the device management industry. Before we familiarise ourselves with the topic at hand, here’s a little backstory.

Apple has always prioritized providing the best device management features and functionalities to organizations relying on their tools. Apple’s heavily used MDM protocol is what makes it all happen. This protocol which is already provided within iOS, macOS and tvOS devices, is updated every year.

The current MDM protocol is described as ‘imperative and reactive.’ Any management process involves multiple round trips between the device and the server. This raises some serious performance challenges if we increase the number of devices. To make the MDM protocol more scalable, Apple has introduced a new paradigm on the existing protocol called declarative device management.

What is declarative device management?

A declaration is pretty much what you call the policies pushed onto a device by an organization. They can also act like dictionaries containing keys and values. These policies can be pushed on multiple or single devices. There are four types of declarations; Configurations, assets, activations and management.

Configurations will be applied automatically in sets that are represented by activations. However, all the configurations have to be valid for the activation to succeed. If one configuration or a reference asset is invalid, the activation fails.
Management declarations are a great way to convey static information such as organization details or the capabilities to the device. 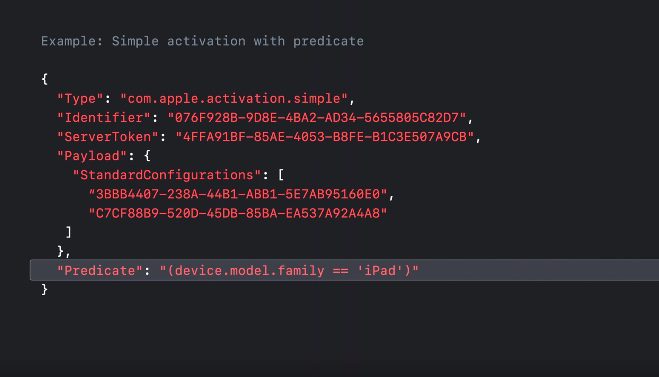 Declarations are arranged as JSON objects rather than plists when sent over the network. A declaration is structured with three sections.

Standard keys
Standard keys provide information on a declaration and uniquely marks them for easy identification and synchronization by the server.

Predicate
Activation can also include a predicate that acts as a condition. If the predicate is true, then the configurations under an activation is processed.

The device state need not be the same as the declared state. Let’s take the case of a password policy as an example. The new password criteria declared, is not fulfilled by the device until the user heeds to the declaration. Only after user intervention will the device state change. The status channel was established to keep track of this status change. If the server were to get updates on every status change, it would be unnecessarily loaded. We can utilize subscription configurations to subscribe to specific status updates and avoid crowding the server with unnecessary information. The updated status of declarations is always reported to the server regardless of subscription. 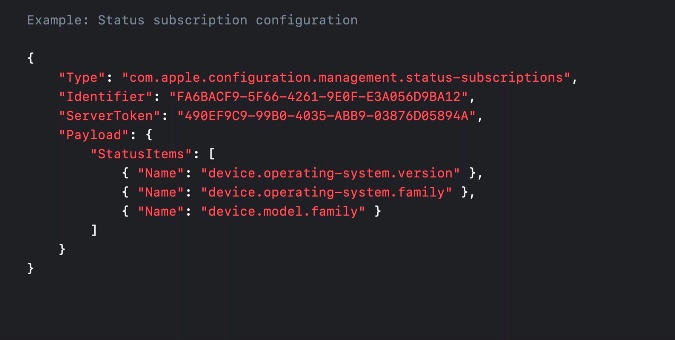 The above subscription declaration is used to subscribe to the device operating system version, type and model. First, the initial status of the three status items would be sent to the server. Only the status of items that underwent an update will be sent in the consecutive reports. Let’s say that the status of the OS version changed; then, only the updated OS version will be included in the report.

It is vital to maintain the compatibility of various versions of the MDM with MDM protocol. The capabilities of both the server and the client are advertised to each other to achieve this. Each would know when it can start utilizing the capabilities of the other without relying on any software or hardware updates.
The shared details include supported payloads, protocol updates and server capabilities. The client capability changes are sent to the server as status updates to take advantage of them immediately.

Declarative device management is already integrated with the MDM protocol so that it can be used by MDM vendors right now! Since the protocol did not undergo a complete change, it can be integrated into an MDM solution without disrupting its server infrastructure. The declarations in the status channel are already present in the policies and MDM commands. The integration will not affect the current behavior of the MDM solution.

Referencing a policy in a configuration
Image source: Apple WWDC 2021

You can install a profile to a device by using a profile URL within the configuration. This features ensures that we can use the entire set of profiles in an MDM to use declarative management properly.