Whenever an MDM server (or any app server) wants to communicate with the client app installed on a device, the server sends a notification to the device. This notification is transferred over another server known as the push notification server.

Different push notifications are catering to various needs or use cases. A standard one sends a single notification to the user base allowing users to receive the updates in real-time. During the enrollment process itself, MDM registers the enrolling devices for the Push Notification Service of the respective platform which are:

Once a device is enrolled, the MDM server requests the device through push notification to establish a communication session with it whenever it is necessary to apply or modify any settings on the enrolled device. If a device is offline when the MDM server requests for a management session, the notification will be delivered to the device as and when the device comes online. The Push Notification Service of each platform has its own caching method to make this possible. 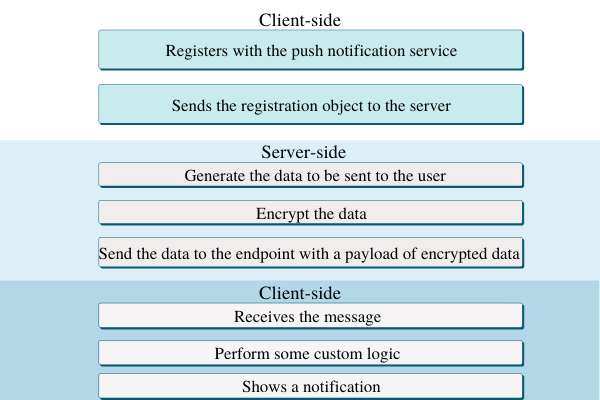 Workflow – The process of sending and receiving push notifications

Creating a secure connection between your MDM server and the push notification service is the primary step for communication. The basic mechanism is similar for all notification services. When the organization wants to communicate with a particular device, the MDM server generates the request containing the data and the unique device identifier. This request is forwarded to the Push Notification Service which delivers it to the user device. The device’s OS checks and delivers the notification to the client upon receiving it from the service. The client app handles the notified data and performs the changes requested by the MDM server.

A notification consists of two components: 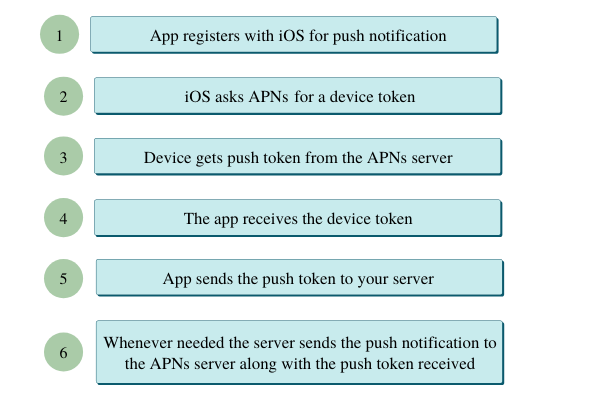 WNS is the one that allows the highest notification payload among the three, and that is 5 KB.

FCM has two types of implementation at the app server’s side – the HTTP and XMPP implementations. HTTP implementation works in a similar way to that of APNs and WNS, but the XMPP has a different aspect. When XMPP implementation is done, then the upstream messages (messages from the client to app server), as well as the downstream messages (messages from the app server), are handled by the push notification server. In this case, it can be said that there is an improvement in reliability of service because it is possible to send acknowledgments for a notification from the client device through FCM. It is also known that FCM will send ‘success’ or ‘failure’ on successful or unsuccessful deliveries, respectively. 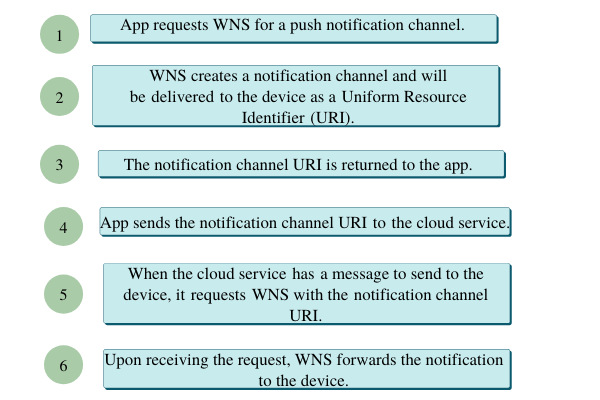 WNS sends HTTP response codes on various events in it.

It is a good practice that the developers log and inspect the details of all the requests and the response codes as they have to provide the response code as well as the header information while reporting an issue.

The APNs stores only one notification per app. If a second notification to the same app arrives, then the first notification is replaced by the second. The notifications are deleted if the device remains offline for 28 days.

APNs use four TCP ports, which are:

443: Used for communicating with APNs when communication using port 5223 is not possible.

2195: Used to send the notification to APNs.

5223: Used for communicating with APNs.

Ports 5228, 5229, and 5230 are to be used in Firebase Cloud Messaging. Google uses any of these three ports (different ports at different times). TCP port 443 should be open in the case of the Windows Notification Service. 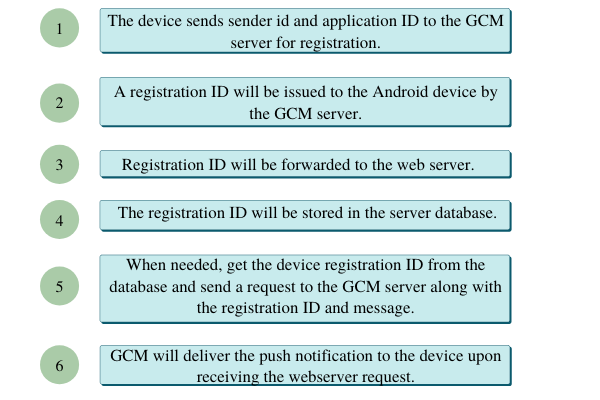 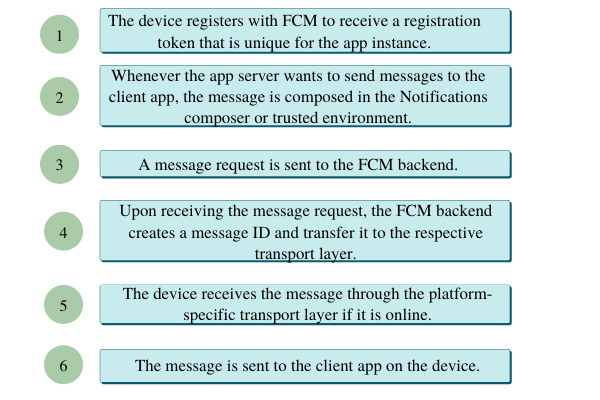 GCM is the older version of FCM. Google recommends migrating to FCM, as new features will not be added to GCM. Google currently supports the latest version of GCM SDKs as the migration takes time.